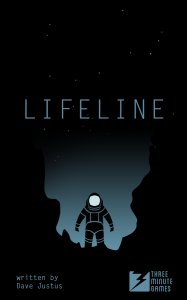 Few weeks ago, some friends gave me a link to a mobile application called Lifeline. “Venerandi – they said – it seems like the things you do with Quintadicopertina, it is like interactive fiction”. So I download the app and played it with my smartphone.

Lifeline is an interactive fiction.

It has a lot of interesting things: there are sounds, there is binary parser, there is a time concept in player activities, it uses smartphone and tablet notifications, it has got a good design, and – wow! – there are not multimedia/wunderkammer effect. Text wins.

And yes, it is well-written too

Enough interesting things to move me for an interview with Dave Justus, the author of the story, and Mars Jokela of Three Minute Games, the game designer on Lifeline.

Q: Often when someone talks about Lifeline cites the “return of interactive fiction”. But did they really ever leave?

Dave: First off, I think it’s hugely flattering that Lifeline is considered to be part of the vanguard of this supposed “return.” I don’t know that interactive fiction ever really went away, but maybe the spotlight had dimmed for a time. It’s great that text adventures like ours can be a part of bringing that sense of reader/player involvement back to the fore.

What we strive to do, with all of the Lifeline games, is to make the player complicit in telling the story. There are, of course, only a finite number of choices one can make — but our goal at every turn was to make that finite number feel as large as possible. It’s tough to compete with true “open-world” games when you’re conveying the whole story through text, but we’ve worked hard to provide as much of that feel as we could. These stories are as interactive as the player wants to make them — that’s the thrill for us as designers, and hopefully that comes through in the final product.

Dave: I’m probably betraying my age by saying that I spent a lot of time on my Apple IIe playing Infocom’s interactive fiction games. By far, the one I invested the most time into was their version of Douglas Adams’s Hitchhiker’s Guide to the Galaxy. I was a huge fan of the novels, and the idea of being a part of that world — of making decisions that influenced those characters — was the most exciting thing my young self could imagine.

Q: I played the game… (or I read the interactive fiction?) I ended Lifeline and Taylor died. But I feel this as a story without a happy-ending. I mean: I do not feel like I have lost a game, but as I read a sad story. Ok, Lifeline is a game or a novel? Or something else?

Dave: In terms of word count, the original Lifeline and Silent Night are lengthy novellas. Lifeline 2 is an out-and-out novel, coming close to 100,000 words. I outlined each game the same way I would a novel — which is fairly loosely, because I like to allow myself to be surprised, and not to resist when the characters begin taking the story in a different direction than I’d originally envisioned (which Taylor did a lot).

I think, in the end, the Lifeline series splits the difference between reading stories and playing games, in that the stories could not be told without the player, and the player’s connection with — and investment in — the characters and their choices is what makes the story worth telling to begin with.

Q: From a writer point of view what are the difference between write a linear novel or a interactive work like Lifeline?

Dave: When I initially sat down to write the first Lifeline, I figured it would be just like writing a short story. It didn’t take long for me to realize how wrong I was. It was more like writing thousands of very short stories. Every few sentences, I had to diverge, and diverge again. And with every branch, the word count grew and grew, and the number of story threads I had to keep track of just kept ballooning.

I eventually learned that I needed to find ways to draw all the threads together from time to time, which is something that’s important to do in a novel, as well. The bulk of my non-game writing has been in comic books, which uses a very different set of writing muscles — but there are plenty of notions that apply across all disciplines, like determining how long to spend in any one scene, how much space to put between action sequences, or how to balance levity with introspection.

Q: The programmers of text adventures in Italy (i.c.g.a.t.) have often discussed about the parser of text adventures and how the good old parser should adapt to new mobile devices. Lifeline makes a very drastic choice from this point of view, breaking the choices in crossroads: either do this or do that. How this radical choice has impacted the narrative of the text and its interactivity?

Dave: The binary choices generally offered us the right amount of structure, without letting the story get completely out of control. Of course, there are moments where multiple options present themselves, but we present them two at a time. On other occasions, both options point toward similar outcomes. But even though each individual choice may only be “do this” or “do that,” an accumulation of a thousand such choices makes for a hugely complex narrative.

Q: Another great idea in Lifeline is time management. Taylor is kind of tamagotchi living in his time, needs us, contact us, sleeps, fights with us. Taylor has personality. On facebook I have written at some point, “the character of the story I’m reading had a fight with me. And now Taylor is sleeping”. How was this idea born?

Mars: Lifeline was originally designed to take advantage of interactive lock-screen notifications in iOS 8. The game literally exists because our studio founder Colin Liotta wanted to make a game that could be played purely through notifications! So from that starting constraint the idea for a real-time choose-your-own-adventure style story came about fairly naturally, and also that Taylor would work and sleep on their own schedule.

I think that as Dave wrote the story, it probably felt believable that Taylor would become annoyed and snippy at the player if you pressed them to do something that felt unsafe or if you jerked them back and forth with contradictory instructions. Dave’s characterization of Taylor feels so believable, it’s clearly the reason so many players have responded enthusiastically to the game.

Q: Lifeline also introduces the sound. After years of talking about ebook with sound, Lifeline uses it in a very sober, with a reminder beep for each Taylor notified and a musical background pattern. What study there was behind this choice?

Mars: In building the sound design for Lifeline, I wanted to evoke in the player a little bit of the feeling of helplessness and dread that Taylor would be experiencing during this ordeal. The sound design is very austere and cold, much like the moon Taylor is stranded upon.

Horror film soundtracks are designed to put the viewer on edge, so I tried to leverage some of the same techniques — like punctuating the lower moments of the ambience with scattered breathing samples, and varying the number of repetitions so you aren’t sure if another one is coming or not. In choosing the musical and ambience samples to work with, I was drawn to the ones that I felt uneasy listening to.

I was also a fan of the Infocom text adventures and saw their connection to this modern day “texting adventure,” so I chose messaging beeps that reminded me of my Dad’s old Intel 286 PC. I wanted to use distinct tones for new message lines, for the appearance of choice buttons, and for selecting a response. This lends an almost musical cadence to each passage, as you receive several messages in a row and send your reply back to Taylor.

Q: Lifeline is an application. Why not an EPUB3 ebook?

Dave: I think the simplest answer is, we wanted to work in the format that made the most sense to us, and that would appeal to the widest possible audience. Releasing the Lifeline series as gaming apps has allowed us to put them on millions of players’ radars.

Mars: In order to leverage the real-time gameplay and use those interactive iOS 8 lock-screen notifications, Lifeline had to be built as its own app. But really, we are a games company and games are what we know, so I don’t think we really considered any other options at the time. That being said, Lifeline is a story that could absolutely be experienced across a number of different platforms.

Q: What do you think about the international scene of interactive fiction, and how Lifeline fits in this?

Dave: I’m chagrined to say that I don’t have a good sense of the international interactive fiction scene. I do know that Lifeline has fans all over the world, and has been translated into several languages, so it’s clear that there’s a global audience for games like this… which is no surprise, since imagination and creativity have never known borders.

Thank you Dave, Thank you Mars.